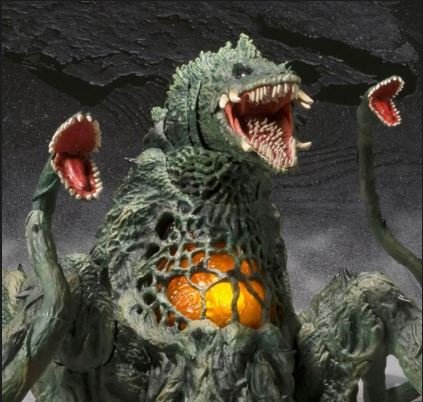 First appearing in the 1989 filmGodzilla vs. Biollante, this menacing beast is a genetically-modified rose kaiju hybrid created by Toho. Originally created as a human-and-rose hybrid in 1984 by splicing the DNA of Dr. Shiragami's daughter, it was later suggested that as a result of the fusion, the plant developed a level of sentience which could only be detected by those with psychic abilities.

Thanks to Bandai, Biollante has become the biggest figure in the S.H.Monsterarts line so far! At 19cm tall and 45cm wide (including the tentacles), the genetically modified monster looks highly menacing with its reptilian, plant-like aesthetic. The piece includes a luminous globe embedded in its chest, which can change colours beautifully via a switch. It's also been equipped with joints for each part, allowing for impressive articulation and movie-accurate posing. Depicted with a high level of authenticity and detail, Biollante looks stunningly horrific, from the countless bark/lizard-like textures running along the surface, to the intricate sculpting giving it that truly monstrous appearance.

Bring the terrifying Biollante into your monster collection today and scare the pants off of any onlooker!