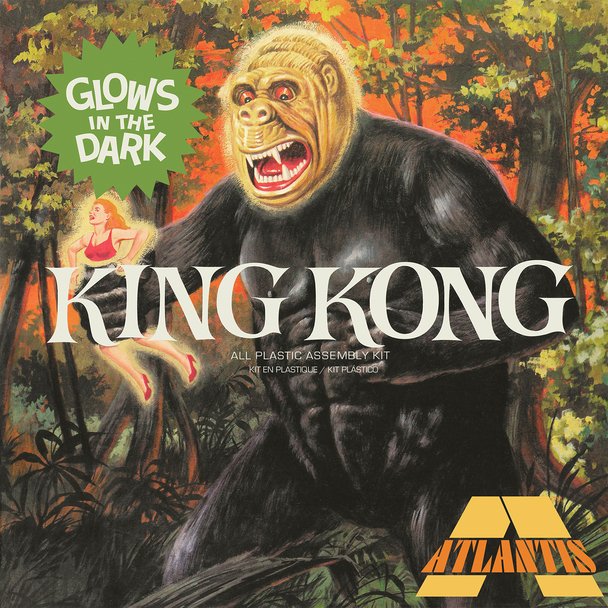 Dimensional Branding Group (DBG) and World Builder Entertainment are excited to announce a new agreement between DeVito Artworks and Atlantis Toy and Hobby to bring the original 1960’s King Kong model kits back to a new generation of fans.

1/25 Scale. Kong Stands nearly 10 inches tall when complete! This kit will come with King Kongs body parts molded in dark brown. The kit will not include kongs head and feet molded in brown. Those parts were moved to the glow parts mold at some point.

The Atlantis kit will include the specal square glow parts tree and the accessory parts tree, not seen since the last glow in the dark issue in 1972.  It will be packaged in the 9.75 x 9.75 Big Square Box.

People have been asking about the palm tree leaves that get glued on top of the trees. The kit will include 3 palm trees on the accessory mold and one tree on the glow parts mold. 4 total.

Plus duplicate parts as well such as the nameplate, trees, woman figure and other accessories.


Seven million years ago a gigantic ape was born on a small island off the Malay Peninsula. While still a baby, Kong's parents were killed by a Tyrannosaurus. Millions of years passed, but the island remained the same. Prehistoric monsters still roamed there. It was as if time stopped on this one small island. King Kong grew unbelievably large and strong. Savage natives invaded the island but Kong remained absolute ruler. In desperation, the natives built an immense wall across the base of the island to keep out the prehistoric creatures and the monster, Kong. They worshipped Kong as a God and and appeased his wrath by sacrificing young natives to him.
A movie Producer, known for his exciting and dangerous films, acquired a crudely drawn map of Kong's island, known as Skull Island. He hired a tramp steamer and set sail from New York in quest of adventure. With him was a girl, an unknown actress whom he was going to make into a star.
As weeks passed, the crew became disturbed at the secrecy of the voyage. Only the Producer knew the destination. They were also disturbed by the great quantity of ammunition and gas bombs on board, enough to launch a full-scale war! Finally, the crew insisted upon knowing the destination, so the Producer asked if they had ever heard of King Kong. Of course they had, since it was a Malay superstition that most sailors had heard at one time or another. He told them that it was not superstition, that he had the only existing map of the legendary island where Kong lived. Skull Island was their destination!
Early one morning the ship became fog-bound in strange waters. Suddenly out of the mists arose a gigantic skull. On closer inspection, the crew realized it was only a rock formation, the one for which the island was named. In fact, the whole island was surrounded by rocks except for a small sandy peninsula. From the deck they could see the enormous retaining wall. They shuddered at the horrors that lay in wait for them behind that wall.
Landing on the beach of this Lost World, they realized that a sacrificial ceremony was going on. A native spotted them and the ceremony stopped. Their witch doctor wanted the girl from the ship as a gift for Kong. The crew refused and ran for their lives.
That night a group of the natives kidnapped the girl from the ship. They tied her to a stone altar outside of the gates of the wall. She heard the sounds of some immense beast drawing closer. The natives ran in terror. Kong came out of the jungle. He approached the altar, ready to take his delicious snack. Suddenly he stopped. Never had he seen a creature like this, a girl with golden hair. He picked her up and held her close to his hideously wrinkled face. His hot breath seared her flesh. Then he carried her off into the jungle.
By now the crew realized that the girl was gone and went in search of her. They tore open the gates in time to see Kong carry her off. The Producer sent back to the ship for gas bombs. When they arrived, he and the crew plunged into the dense underbrush. Overhead they saw flying lizards, around them they heard weird noises. From a thicket, a gigantic spike-tailed monster charged at them. Bullets would not stop it. Luckily the gas bombs did, and the beast fell to the ground, stunned. Now they were able to kill the beast at close range.
Then the girl was sighted high on a ledge. A plan of rescue was decided upon. The crew would divert the ape while the first mate climbed onto the ledge to bring her down. It worked, but now they had to get back to the wall. They scattered, each taking a different path so Kong would be unable to follow them too easily.
Once inside the gates, the Producer decided to bring King Kong back to civilization rather than to film him. Using the girl as a lure, they got Kong inside the gates where they used gas bombs to subdue him. Then, heavily chained, they loaded the unconscious Kong onto the ship.
Back in New York, King Kong was to go on display in the city's largest theater. Crowds gathered at the entrance. When the last person had been admitted, the lights grew dim. The building was silent with expectation. At last the curtain went up. There, behind bars, was the mighty Kong! The crowd grew noisy in their fear and amazement. The noise so enraged Kong that with his tremendous strength he broke through the bars which imprisoned him. Frightened people scattering in all directions.
Kong got loose on the street. Helicopters followed his path of destruction. Buildings toppled. He crushed the elevated trains with one powerful blow from his mighty fist. At the Empire State Building, Kong found what he was searching for, the golden-haired girl from the voyage. He snatched her up and began climbing the side of the building. Fighter planes were called out. Kong set the girl on a ledge and began swatting at the planes as if they were flies! Finally, one plane got in range and mortally wounded Kong. He came crashing down the side of the building to the street below.
When the people realized that the monster Kong, the 8th Wonder of the World, was killed, they breathed a sigh of relief. But, what of the rumors that Kong had a son? Is it merely legend..... or is it fact? !!